Poor Quality Corn Could Be From Seedling Insect Pests

Find this article at:
go.ncsu.edu/readext?412985
— Written By Dominic Reisig

Over the past two weeks, there have been a flood of reports of seedling insect pests of corn. I’ve also seen a lot of corn riding down the road that came up beautiful, but looks stunted, yellow, or otherwise deficient. Many of these problems are likely not insect-caused, but seedling-corn insect pressure has been high this year. Combine this with good planting conditions followed by cool and wet weather and you have a recipe for disaster.

Seedling insect pests can stunt corn by feeding on leaf tissue above ground or can chew roots. Both types of feeding will lead to nutrient deficiencies since insects damage tissues that are needed for nutrient uptake and distribution. Your best course of action is to diagnose the problem by finding the insect (at this point it is probably too late) and changing course next year. Seed treatments, rotation away from corn (including your neighbor), and starter fertilizer are proven combinations that can help you avoid and outgrow this type of injury. Leave one of these three ingredients out and you could be less than satisfied. Here is some of what I am seeing this year. 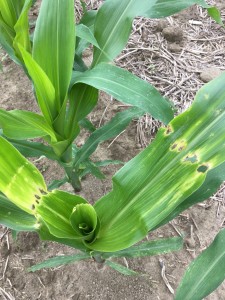 Stink bugs feed below the soil surface at the crown or above the crown on foliage. The resulting injury can be seedling death, tillering, stunting, or foliar injury (photo to the right). This injury is oftentimes indistinguishable from billbug injury. I often find that foliar stink bug injury results in relatively small holes that are more or less circular. There is generally a yellow margin around the holes, rather than the brown and dead tissue that billbugs create. I recommend that you scout corn early (V3-V6) to identify the pest and to make a treatment decision. Seed treatments registered for corn are relatively ineffective and pyrethroid-based sprays should kill what stink bugs are out there. Corn should be safe from stink bugs once it is 32 inches + tall until the ear is forming, before tasseling. 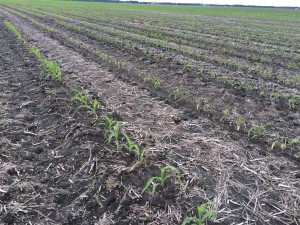 This is a really tricky pest since it moves in the soil profile and is a complex of different species, each with a different biology, including behavior and number of generations. This pest chews roots and the result can be stunted plants or plants that look nutrient deficient. Generally you’ll see this in spots in the field rather than a uniform deficiency. Most of these grubs are susceptible to seed treatments and in-furrow insecticides, but on a year like this, you can expect some problems. We have a 2016 trial location with good white grub pressure where our best treatments (including Poncho 1250) are still getting injured. The best way to sample for this is to dig plant when they are V3-V6 and to look for the grubs in the root zone. Keep in mind that these pests will move in the soil profile as moisture and temperature changes. So you may or may not see them when you dig, even if they are there and causing a problem. 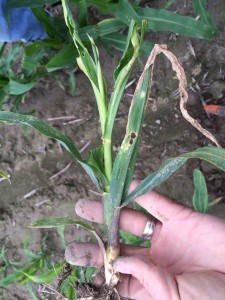 Billbug-injured corn seedling. Note the irregularity and severity of the injury compare to typical stink bug feeding. This is not a dead give-away, however. Sometimes stink bug injury can be just as severe.

This insect is generally a problem on organic soils (Blacklands), but can be present anywhere corn is grown in the Coastal Plain of North Carolina. The adults are difficult to find and are responsible for the injury we see this time of year. You can sometimes move seedlings to one side and find a billbug face-down in the soil feeding on the crown of soil seedlings. They will mate and females will lay eggs into seedings. Larvae will then develop in corn, emerging during July and August. Injury can be severe, with plants that are killed, stunted, or transverse foliar holes (similar to stink bug). I recommend Poncho 1250 as the best effective treatment. A new combination on some newer Pioneer hybrids (Cruiser 250 + Lumivia) has activity and seems to be effective somewhere between Poncho 500 and Poncho 1250. Although seed treatments are good, their concentration (and efficacy) changes over time (below). Combine this with cool wet weather and nutrient deficiency and injury can be multiplied many times over. 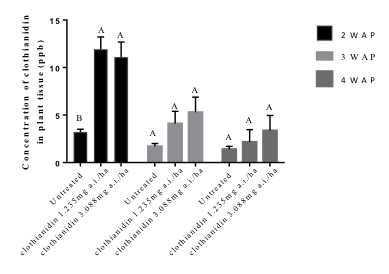 Concentration of clothianidin (Poncho) in corn tissue over time. Rates are equivalent to untreated corn, Poncho 500 and Poncho 1250.