Find this article at:
go.ncsu.edu/readext?738282
— Written By Dominic Reisig (2 months ago)
All growers who plant Bt corn in North Carolina are required by law to plant non-Bt corn (refuge). Details are specified on the bag tag, but non-Bt corn must represent at least 20% of the total corn acres, including both Bt and non-Bt corn. Even if refuge-in-a-bag (RIB) hybrids are planted, North Carolina growers must plant a separate block of non-Bt refuge corn. Refuge is important because it slows down resistance. Our only close to 100% effective Bt toxin for bollworm (corn earworm) is Vip in Leptra and Trecepta corn and Bollgard 3, TwinLink Plus, and WideStrike 3 cotton. Growers can take action to slow resistance to Vip by planting refuge as resistance insurance. Growers can also take advantage of an NRCS Conservation Stewardship Program, if they qualify, by planting more refuge.

Research across the Cotton Belt has confirmed that when corn is planted on time and other insects, like fall armyworm, aren’t prevalent, corn earworm does not cause a yield penalty (Bowen et al. 2014, Reay-Jones and Reisig 2014, Bibb et al. 2018). Since corn earworm is the dominant caterpillar pest that infests Bt in North Carolina, in the vast majority of cases, growers should not experience a yield penalty from planting a non-Bt refuge hybrid with the same genetic potential as a Bt hybrid. In situations where other pests are present, such as European corn borer and fall armyworm, Bt corn can provide a consistent yield benefit. These pests are very sporadic and worse when corn is planted late, outside the recommended planting window.

We planted nine Dekalb hybrids on May 13, 2020, toward the end of the planting window, in Plymouth, NC. At R5, we assessed earworm damage and also yield at the end of the season. While this only represents a single trial location, it confirms our past findings that non-Bt refuge hybrids with the same genetic potential as Bt hybrids yield the same (2019 results). While we don’t recommend growers use this test to select a Bt hybrid (instead consult the NC OVT), growers should work with their seed dealers now to secure access to non-Bt hybrids for resistance insurance. 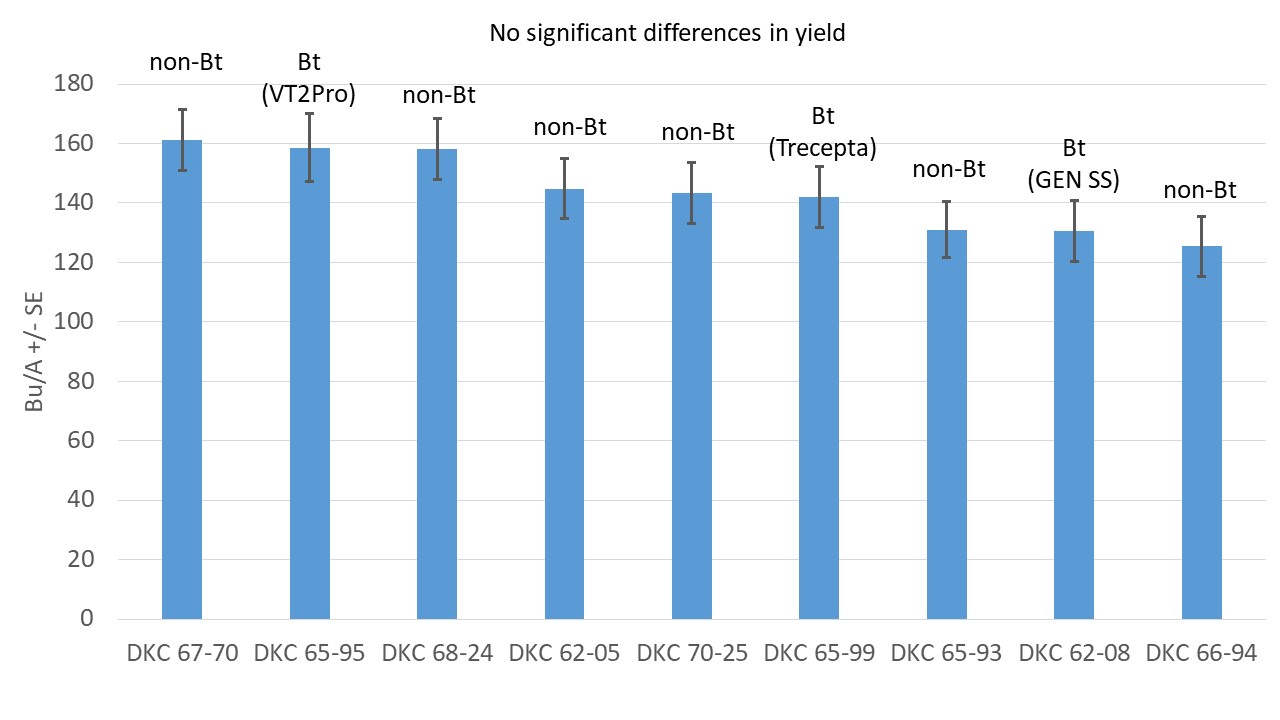