Brown stink bug is the primary pest species of corn in North Carolina, although brown marmorated stink bug, green stink bug and southern green stink bug can also be pests. They feed through piercing sucking mouthparts and can cause three distinct types of damage. 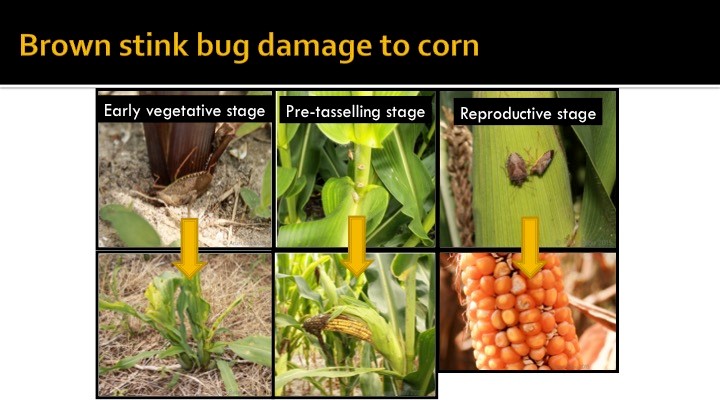 Where can stink bugs be a problem?

Scouting. Scout corn for stink bugs from V1 through R2. Check all edges first (especially sources like woods, weeds and other crops), since they concentrate toward edges and not field middles. The number of sampling stops will depend on the number of stink bugs present and field size. At each sampling stop, check at least 10 corn plants. Sampling the entire plant is not necessary. From V1 to V6, scout the base of the plant on the stalk below the lowest green leaf. From V14 to VT, find where the primary ear is located or peel back leaves to find where it is forming. Scout the stalk from the first leaf above and below the primary ear. From R1 to R2, scout the stalk at one leaf above and two leaves below the primary ear.

Thresholds.  Thresholds vary depending on growth stage and are based on a 100 plant sample as described below (see table). These thresholds are not percentages, but numbers. If a single plant has multiple stink bugs, this must be counted into the total. If the number of stink bugs exceeds the number in the “treat” category, treat the field even if 100 plants have not been sampled. If the number of stink bugs per plant falls between the “treat” and “do not treat” category, take more samples until a confident decision can be made.

Insecticide control. Many insecticides in the pyrethroid class are effective for brown stink bug in corn. However, bifenthrin is the most effective both because it can be applied at a rate that contains more active ingredient than other pyrethroids and because it is more toxic to brown stink bugs. Expect only a week residual.