Observations of sulfur deficiency symptoms in corn fields across North Carolina have indicated a widespread problem with sulfur fertility. In many years over 72 % of the corn tissue samples analyzed by the tissue testing laboratory in the Agronomic Division of the North Carolina Department of Agriculture and Consumer Services have low to deficient sulfur in the plant tissue. Further, other corn samples received at the testing lab that list “yellowing ” as a symptom show very high N:S ratios in the plant tissue. This indicates that sulfur is limiting relative to the amount of nitrogen in the plant tissue. Growers are concerned about what is happening to cause this problem, what they should be doing to correct the problem and what impact this will have on yield. This bulletin is being sent to help in diagnosis of the problem and in answering grower questions.

Unlike nitrogen, sulfur is not readily remobilized from older to younger plant parts. Therefore, sulfur deficiency is characterized by a yellowing of the younger or “new” leaves of the corn plant. When the corn plant is small, mild sulfur deficiency symptoms show up as interveinal chlorosis of the leaves emerging from the whorl (Fig. 1 and 2)). As the plant ages and the deficiency becomes more pronounced, the entire leaf turns yellow with slightly greener veins (Fig. 3). Typically, sulfur deficiency symptoms are not expressed uniformly across the field, but rather the symptoms are present in spots or streaks across the field. Since the depth of the radicle and seminal roots, the amount of residue cover, and the drainage of water through the soil profile are factors influencing sulfur uptake and soil availability, it is common to find plant symptoms in the lower spots in the field, where residue cover is greater, or where seeding depth was shallow. 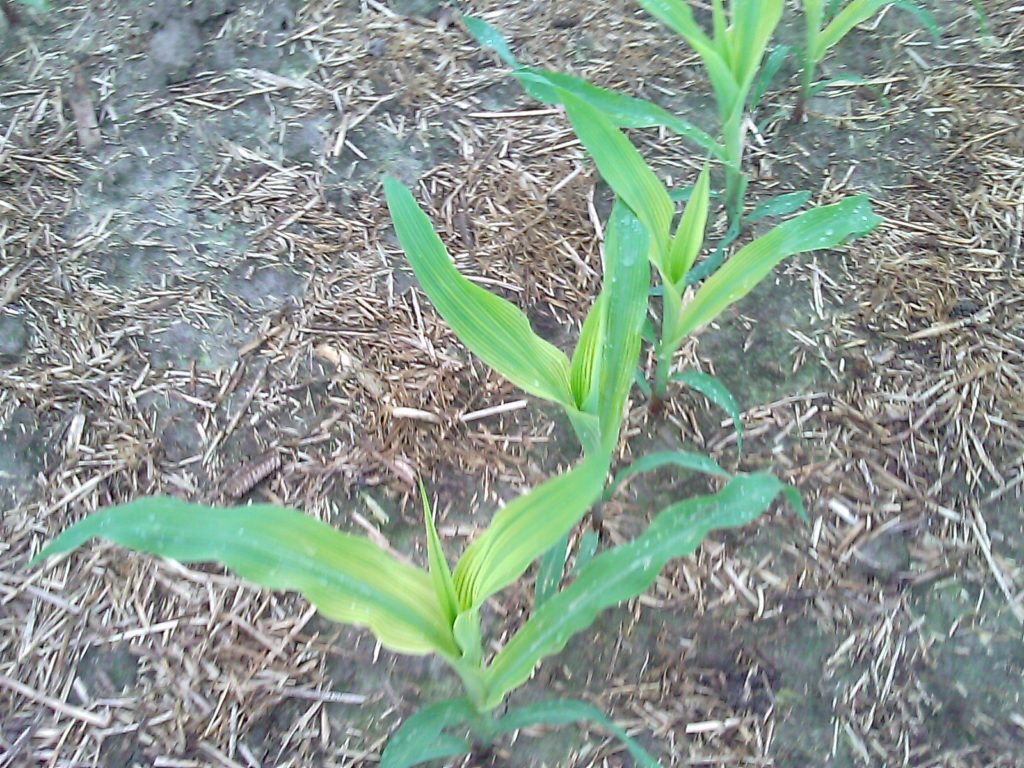 We have seen fields where one row had very mild symptoms and the next row showed severe sulfur deficiency. Sulfur deficiencies are often associated with sandy soils. However, in the past few years there has been increasing evidence of sulfur problems on mineral-organic and even on heavy muck or organic soils. This is especially the case when young plants with limited root systems show sulfur deficiency. Caution: Other nutrient deficiencies can show similar patterns and symptoms as those displayed by sulfur. Magnesium deficiency is often characterized by interveinal chlorosis. Therefore, plant tissue analysis should always be used to confirm visual symptoms of deficiencies and to detect unseen deficiencies. Pictorial information on how to collect and submit tissue and soil samples can be found at the North Carolina Department of Agriculture and Consumer Services’ Agronomic Division’s website at www.ncagr.com/agronomic under the Plant/Waste/Solution section.

What Factors are Causing These Problems with Sulfur?

There are several factors that have resulted in the increasing number of cases where sulfur is being diagnosed as deficient or limiting in young corn plants. First, there is the fact that we have had several years of extended periods of frequent and intense rainfall events. Since sulfur is a mobile nutrient and is water soluble, this sulfur in the upper soil profile (top 2 to 4 inches) has been leached into the lower rooting zone. The reduction in sulfur emissions brought about by the clean air act means that these same rainfall events are not replacing the sulfur leached. The second key factor is the size of the root system. Following germination the radicle emerges from the corn seed and is the primary root system for the first two weeks after emergence. However, as the corn plant develops the radicle deteriorates and is replaced by seminal roots coming off of the first node of the corn plant. These seminal roots are initially very shallow (1/2 inch or less) and then grow deeper over time. Therefore, during the period when the plant switches from the radicle to the seminal root the lack of nutrients in the upper 2 to 4 inches becomes a severe problem. Other factors contributing to the frequency of sulfur deficiency symptoms are the increasing use of no-till or minimum till practices that increase surface residue, the lack of tillage that mixes shallow soil layers with nutrients deeper in the soil profile, and marginal to low soil pH. The increasing surface residue means that soil temperatures are cooler in the shallow seed zone resulting in slower root growth during the switch between the radicle and seminal root systems and cooler temperatures reduce the efficiency at which roots take up nutrients. The lack of soil mixing means that the differential in sulfur concentrations between the shallow and deeper soil profile becomes greater over time with less sulfur in the surface layer and more in the deeper profile. Therefore, while the soil test may show adequate or high levels of sulfur, the upper 2 to 4 inch layer may have much lower concentrations. Low soil pH results in less available sulfur (as well as other needed plant nutrients), stunting of needed root development, and generally enhances the deficiency symptoms relative to fields with adequate pH levels.

What Should Growers Do to Correct This Problem?

There are two solutions to the sulfur problem: short term and long term. For growers experiencing sulfur deficiency symptoms on their current crop the question is whether to apply sulfur or to wait and see if the problem will solve itself as the seminal roots take hold and grow deeper into the soil and start taking up sulfur. IF the grower has a soil test indicating a sulfur index above 25 (an index above 50 is high; between 26 to 50 is medium; 25 or less is low; and 0 to 10 is very low) or has applied some sulfur (most likely when farming sandy soils) then there is a good chance that sulfur is available in the deeper profile. IN ALL CASES, if plant deficiency symptoms are present some sulfur should be applied. The question is how much to apply. If the deficiency symptoms are mild (see Fig. 1) and the grower has applied some sulfur at planting or has sulfur index levels from a recent soil test above 25 some sulfur should be applied to simulate root growth and get the crop past this critical period. The reason that the grower needs to apply sulfur even though the soil index shows adequate sulfur is that this nutrient results in the stunting of plant and root growth. Therefore, in cases where deficiency symptoms are showing, the plant is not able to develop enough root volume to reach the deeper sulfur concentrations. On the other hand, if soil tests have shown low to very low index levels (25 or less) and the grower has not been applying sulfur as part of his nutrient program, OR if the nutrient deficiency symptoms are moderate to severe; then the grower should apply larger amounts of sulfur (see recommendations below) with the goal of increasing the amount of available sulfur in the soil profile.

How Much Sulfur to Apply and in What Form When sulfur deficiency symptoms are mild and sulfur should be available deeper in the soil profile, 10 lbs of elemental sulfur should be adequate. Growers should immediately apply sulfur to correct the deficiency. In situations where growers can combine the application of sulfur with sidedress nitrogen, they could choose to use a material such as 24 -0-0-S (3%), this means a 8:1 N:S application ratio. Therefore, an 80 lb sidedress N rate would apply 10 lb S. In situations where it is too early to apply sidedress nitrogen or where more than 10 lbs of S is needed per acre, then other sources of sulfur should be considered. Possible sources include 0-0-50 (18% sulfur), 0-0-22 (23% S, 11% Mg), calcium sulfate (17% S) or ammonium sulfate mixed with thiosulfate to boost the sulfur content relative to N. For deep sands or cases with moderate to severe deficiency 20 to 25 lbs of sulfur should be applied. On sandy soils, 0-0-22 is probably the best source since magnesium can also leach on these soils and this material is a good source of magnesium.

Long-Term SolutionsThere are several things growers could do to help reduce the likelihood of sulfur deficiency symptoms. First, soil test frequently and fertilize to achieve proper sulfur index levels. On low CEC, sandy soils it is becoming apparent that yearly soil tests are needed to help monitor rapidly changing nutrient conditions associated with leaching of soluble nutrients. In many cases this year, sulfur deficiency symptoms have been associated with marginal pH levels. As explained earlier, marginal to low pH levels reduce the availability of critical nutrients such as calcium and magnesium, increase the amount of plant stress during the early growth stages, and reduce root growth. Therefore, a good liming program should strive to keep pH level in the proper range for the soil type. In situations where the grower is using no-till practices it is a good idea to have a soil test done on the top 2-4 inch layer separately from the 8 inch core sample. This way a shallow deficiency can be found and corrected. Growers who leave more surface residue, who plant early in the season when soil temperatures are cooler, or who have extremely sandy soils should consider adding sulfur in their pop-up fertilizer in a 2 X 2 band or at least applying some sulfur preplant. Whenever, growers see an extended period of frequent and heavy rainfall prior to a planting season they should review their fertility program to insure sulfur is adequate. Remember, with less sulfur emission into the atmosphere and low sulfur fertilizer carriers being used, sulfur is no longer available from these sources. Growers will need to apply sulfur more frequently and be especially concerned about newly emerged plants with shallow root systems (corn and wheat).

How Will This Deficiency Affect My Corn Yield?

If the deficiency is mild and is corrected before growing point differentiation (21 to 30 days after emergence) by either the root growing into higher sulfur concentrations or through remedial action, then there will be little or no effect on yield. However, If the deficiency is moderate to severe and lasts beyond 21 days after emergence there could be significant effects on yield. Generally, for each day that sulfur is deficient past the first 21 days after emergence there is a loss of 1 to 2 bushels per acre to the point that total crop failure could be experienced. Certainly, if sulfur is deficient at silking yields could be reduced by up to 75%. Therefore, it is critical that these early deficiency symptoms be rectified quickly by applying sulfur. The good new is that sulfur is readily taken up by the plant and that plants will respond quickly to applied sulfur.