Why You Should Plant Non-Bt Corn Refuge in the Southeastern U.S.

Find this article at:
go.ncsu.edu/readext?833249
— Written By Dominic Reisig

Bt corn has been genetically modified to make insecticidal proteins that protect plants from caterpillars and some root-feeding beetles. In our region, growers pay an average of around $35 more for a bag of Bt corn compared to non-Bt corn. However, corn earworm, the most common caterpillar pest of North Carolina corn, does not decrease yield when corn is planted within the recommended planting window. This is illustrated by the graph below, comparing yields of Bt and non-Bt hybrids with similar genetic potential in 2021- similar to 2020 and 2019, there was no yield difference. In other words, by planting Bt corn, growers are paying more for a seed with a technology that does not generally increase yield in North Carolina. Other sporadic insect pests that may attack corn in our region are European corn borer and fall armyworm. For these pests, Bt corn may offer a yield advantage, especially if corn is planted later than the recommended planting window. Bt corn has been really successful to manage European corn borer and there is strong evidence that Bt corn has reduced the prevalence of this pest. Furthermore, in areas of the North Carolina mountains where corn growers struggle with western corn rootworm, Bt corn has proven to be a valuable tool. 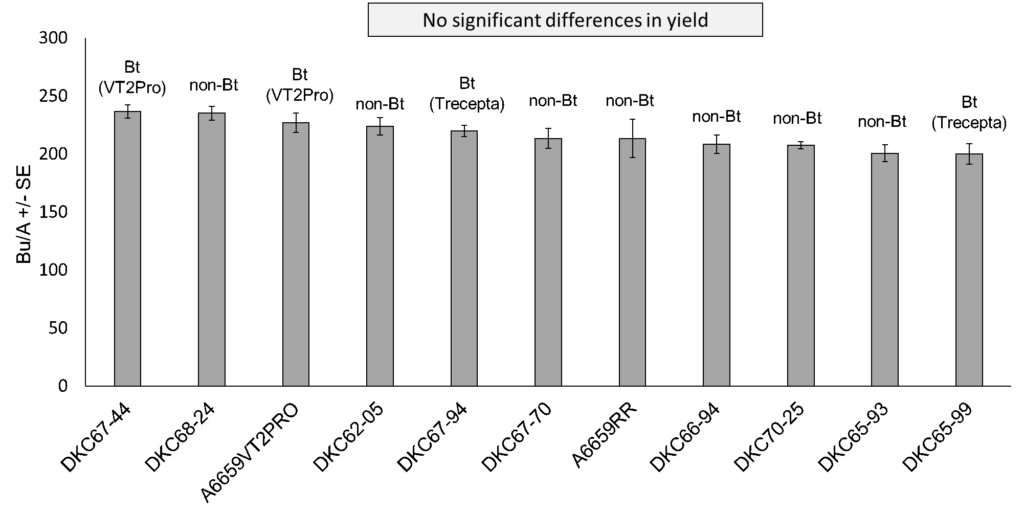 In addition, there is a misconception among growers that Bt corn has a higher yield potential than non-Bt corn. This is not the case when Bt and non-Bt hybrids with similar genetic potential are compared (highlighted here and in 2020 and 2019). The ultimate reason non-Bt corn should be prioritized when choosing which hybrid to plant is because of insecticide resistance management. Corn earworm feeding on corn in the Cotton Belt Region (which includes all of North Carolina) has developed resistance to Bt proteins made by hybrids such as AcreMax, Optimum Intrasect, PowerCore, QROME, SmartStax, and VT2Pro. This leaves us with only a few hybrids that express Vip toxins, such as Leptra, Treceptra, and Viptera corn, to control corn earworm. But again, corn earworm doesn’t cause yield loss in timely-planted North Carolina corn! Growers in the Southeastern U.S. plant are required at least 20% of their total area corn area with non-Bt corn (refuge) for resistance management. Planting of non-Bt corn refuge is important to delay resistance evolution of many pests to Bt and to extend the effectiveness of Vip toxins in Leptra and Treceptra for corn earworm. This is very important for cotton, which has similar Bt toxins to corn, and where the corn earworm can cause up to 100% yield loss.

To conclude, this article is not a discouragement for growers to plant Bt corn, but considering the low economic impact of caterpillar pests in corn, the price difference between Bt and non-Bt hybrids, the yield potential and resistance issues, growers should feel comfortable planting non-Bt refuge corn if a hybrid is selected with good yielding genetic potential. Of course, specific conditions such as yield, price, and insect pressure vary across the state. Growers should reach out to N.C. Cooperative Extension agents and other professionals in their region for further advice on corn hybrid selection and insect pest management.